Congratulations to Jay Stewart and Tim Casto for their work on the Deer Park 2035 Vision Plan, which recently won the Frank F. Ferris II Planning Award in the Implementation category!  The award honors local communities whose efforts have contributed to the elevation of planning principles, greater awareness of the value of planning and improved quality of life. 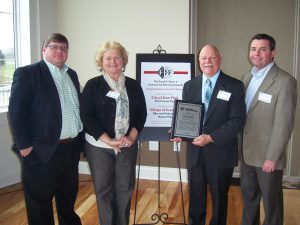 The Kleingers Group drafted the Vision Plan with a heavy emphasis on the implementation of the key priority action items. Some of the key action items identified in the plan and implemented since the plan’s adoption in 2008 include:

The 2035 Vision Plan recognized that without a written master plan, the City of Deer Park would likely place itself at a disadvantage when presented with redevelopment and other growth related opportunities. The implementation of the Vision Plan’s priority goals and action steps will facilitate fiscal sustainability, maintain and enhance the quality of life for residents and businesses, preserve the City’s many traditional neighborhoods, and place Deer Park in a competitive position in the Greater Cincinnati economy.

Tim Casto, serves as Deer Park’s City Engineer. Jay Stewart, serves as a planning consultant to the city and is President of the Deer Park Community Improvement Corporation.