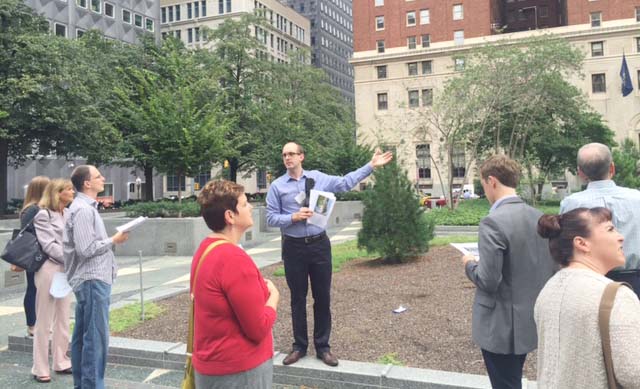 The Kleingers Group was pleased to participate as a guest of the ULI East Central Regional Product Council which took place in Pittsburgh, PA earlier this month.  This select group of ULI members from the ULI Cincinnati, Cleveland, Columbus, Indianapolis, and Pittsburgh region focused on Urban Infill and Mixed-Use Development.  As the host city, Pittsburgh provided an exceptional backdrop for a discussion on how an urban core is being redeveloped thanks to many key drivers for public and private investment.

The group began the session with a walking tour of the downtown area.  The City of Pittsburgh has seen over $3 billion of investment completed over the last 10 years with another $2 billion in the planning stages.  It has transformed from a steel city to a cultural mecca with over thirty theaters in the downtown area.  Pittsburgh has a very dense, urban core with narrow right of way and relatively aged, historic buildings – a differentiator from Columbus. Mellon Square was once thought of as the “death of Pittsburgh” but is now a restored, elevated plaza surrounded by hotels, renovated office/residential buildings, and retail uses.

According to http://www.downtownpittsburgh.com, the redevelopment of residential housing within Pittsburg is rapid with 1,084 residential units opening since 2010 and 90.8% of apartments being rented at the end of last year.  The average rental rates are higher than we are currently seeing in the Columbus area and mixed-income projects are prevalent.

Mixed-use buildings are somewhat the norm and green buildings are important to the office users in Pittsburgh. PNC is currently completing a new tower building rising 33 stories above the surrounding rivers with over 800,000sf of office space.  This building is touted as the world’s greenest skyscraper and has dramatically changed the skyline of the City.

Along with the downtown area, the group toured East Liberty and Bakery Square, which are mixed-use redevelopments outside the urban core which include transit-based development and a new transit center.  Transit and light rail are important to making these developments work and the City seems committed to transportation improvements including a new bike share program.  The Bakery Square development has landed Google as a main office user in the redeveloped bakery building.  A green street featuring permeable pavement and stormwater infiltration systems has been dedicated to public use and will be maintained by the City.  This is one example of the commitment of both public and private entities together to not only implementing sustainable principles within the design and construction but also turning this new, green infrastructure over to City ownership and maintenance.

An All-Star panel discussion including representatives from the City of Pittsburgh, Urban Redevelopment Authority, Hillman Family Foundations, Heinz Endowments, and Pittsburgh Community Reinvestment Group made it evident that the public, private and philanthropic groups are very aligned and engaged to make these projects successful.

The number of investment groups available to developers and the dedication to mass transit is certainly advantageous to the Pittsburg region. However, the overwhelming desire of today’s workforce to live, work and play in urban areas with accessible means of transportation and the walkability to these places is a common theme that the Columbus region continues to work toward with urban development and redevelopment in our region. Methods on how to deal with this demographic shift have been characterized within the Insight2050 report established through a joint effort of MORPC, Columbus 2020, and ULI-Columbus, providing critical thoughts on how public policies will impact future land use. Public policies and transportation top the list of concerns for the continued development success of our area and how we will compete with our neighbors.  The Columbus region has embraced some transit options such as shared-use bikes and cars and Uber, but we are still at the drawing board on mass transit options and funding is a constant concern.

The “brain drain” seems to be a buzzword at nearly every engagement centered around the future success of the Columbus area.  The area must become attractive enough to keep our talent within our region to live, work and play.  This means progressive thinking and risk-taking.  Columbus2020 is one example of an economic development engine that is collaboratively bringing investment and jobs to the region as a whole. Although the Columbus region is taking strides forward every day, we were excited to learn from the success of one of our neighboring regions.